Via Instapundit and Transterrestrial Musings, this Wired article by David S. F. Portree serves as a good introduction to space based solar power. However, the article only skims the surface. It doesn't mention Gerard K. O'Neill, who envisioned space based solar power as the impetus for space colonization in The High Frontier; the book is directly responsible for the creation of the L-5 society and the Space Studies Institute. 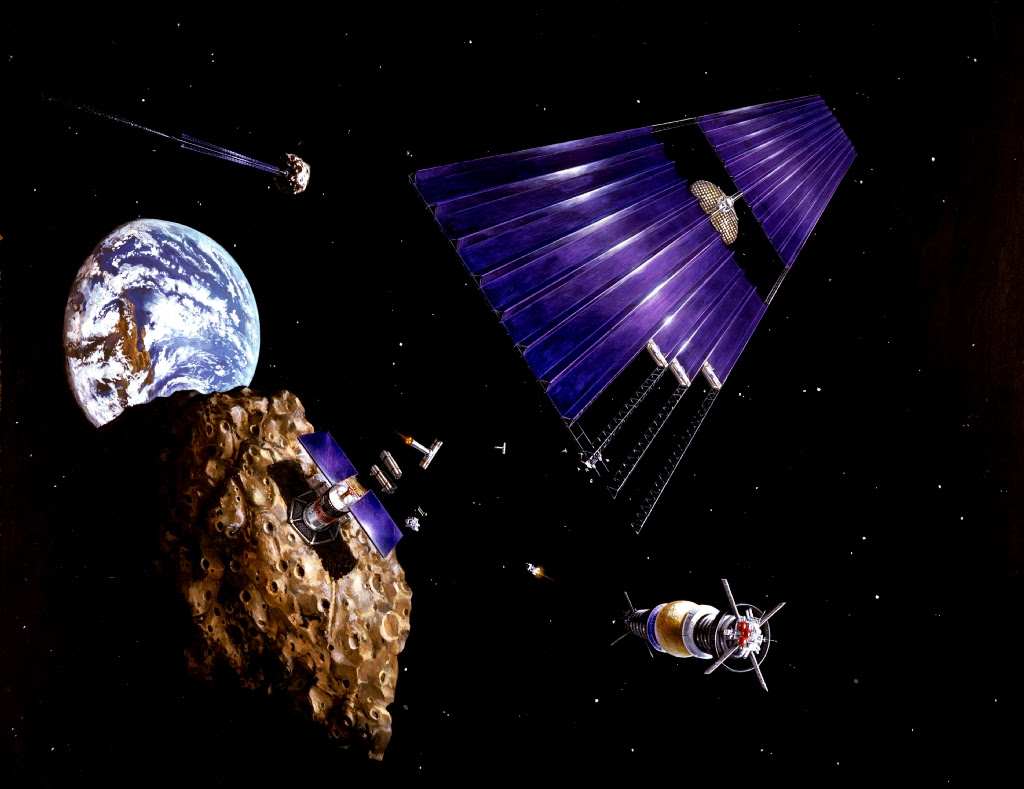 The article also stops around 1980 or so. However, many people have continued to work on the many facets of the issues surrounding solar power satellites (hereafter referred to as SPS), and far more recently. One notable example is the work of Colonel M.V. “Coyote” Smith, particularly in 2007 and 2008 for the National Security Space Office.

I have done some work on inexpensive solar power. I was heavily involved in the build in the video below (I'm the bald guy, with more hair and about 60 pounds heavier than today).


What we built was very inexpensive. With a couple of blind alleys and two failed designs before the one in the video, and including salaries, CNC machining of the prototype turbine (shown powering up some light bulbs using compressed air in the video), raw materials and other expenses, the whole project only cost $100 grand over a period of eight months. And it convinced me that for industrial scale solar power, a heat engine is the only way to go.

Right now, all of the electrical power supplied by coal or natural gas or nuclear power is converted into electricity through the use of a heat engine. The coal or gas or uranium is burned (or fissions) to heat a boiler which turns water into steam. The steam drives a turbine, converting the heat energy into kinetic energy. The turbine drives a generator, turning kinetic energy into electricity. (Hydroelectric power does the same process, substituting gravitational potential energy for heat energy, but the turbine/generator idea remains the same.)

In other words, we have lots of experience with using heat engines to produce electrical power on an industrial scale. The design problems and constraints and tradeoffs are well-characterized and understood through over a hundred years of operational experience worldwide.

Heat engines are dominated by a single equation: Carnot's Theorem. The maximum efficiency of a heat engine is

where T is a temperature in Kelvin of the cold side and the hot side of the engine. All heat engines are constrained by this equation.

There are a few advantages to putting large scale solar power structures into space: nearly continuous sunlight, the ability to make arbitrarily-large flimsy structures, lack of atmosphere. However, the greatest advantage may lie in the Carnot theorem. The background temperature in deep space (in the shade) is around 3 Kelvin. That means that the hot side only needs to be greater than 300 Kelvin (27 degrees Celsius or 81 Fahrenheit) for the maximum efficiency to exceed 99 percent. To be sure, there are losses associated with conversion from heat to motion and from motion to electricity and from electricity to microwave and back, but such losses are mirrored in conventional systems.

On Earth, there is a broad range for the daylight background temperature depending on location and time of year. However, under the best of circumstances a power plant's background temperature will be as low as possible. A background temperature of 40 degrees below zero (C or F) is about as cold as it gets for heavily populated areas of the world. At that temperature, roughly 233 Kelvin, we can see that for a maximum efficiency of 0.99 the hot side of the boiler needs to be about 23 thousand degrees Celcius!

If one is building an SPS out of photovoltaics, then every part of a vast satellite is an expensive electronic instrument. However, if one uses a heat engine, then the collection area needs to be little more than aluminum foil stretched across a frame. The aluminum sheets are positioned and angled so that they reflect the sunlight as a giant parabolic mirror focused on the boiler. Sort of like this, at a hundred times the size: 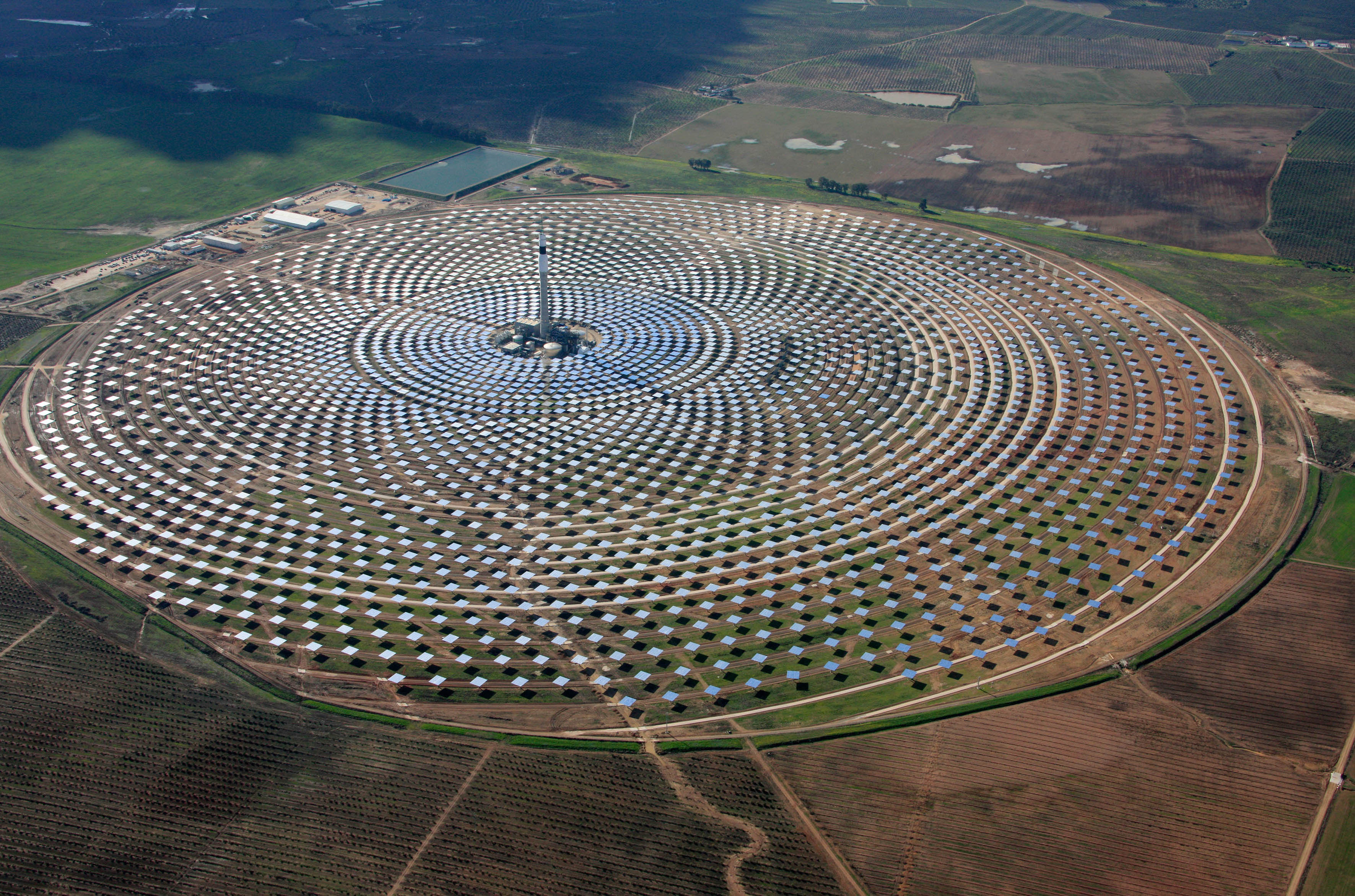 Then the vast majority of the mass and structure of the SPS is nothing more complex or expensive than aluminum foil. It can be made arbitrarily large, right up to the thermal limits of the boiler.

Although only large-scale grid-connected rectennas are illustrated in the Wired article, supplying a city with grid power isn't the only possible application. There is a geometric relationship between transmitter and receiver size. The larger the broadcast antenna, the smaller the receiver needs to be. With a large enough broadcast antenna, a receiver could be small enough to fit inside a car, powering an electric vehicle from space. This would be particularly useful on the battlefield, drastically changing the logistics of keeping tanks in the field.

The power generated at an SPS doesn't need to be directed down to earth as microwaves. It could be beamed as a laser to a receiver on a space vehicle. With an SPS as an external power source, a space vehicle can use almost anything as a propellant in a plasma thruster. Just heat up the propellant with microwaves using power beamed by laser from the SPS, and suddenly the specific impulse of the propellant is an order of magnitude higher than if one was to simply burn Hydrogen and Oxygen. Beamed power would revolutionize inter-orbital transport.

Yet another advantage accrues to using a large Aluminum reflector to gather light. Since Aluminum is a commodity, it doesn't matter where the material comes from. Aluminum from Canada is the same as Aluminum from anywhere else in the world. And it's the same as the Aluminum found in the rocks on the surface of the moon. Although the first few SPSats in orbit would need to be entirely shipped up from Earth, those satellites could power mining operations on the moon and the plasma thrusters needed to bring the Aluminum to orbit, to be fashioned into subsequent solar power satellites. The existence of SPS would thus be both a driver and an enabler for in-situ resource utilization of the Moon - and subsequently, everywhere else in the solar system.
Posted by Ed at 4/22/2014 08:58:00 PM 1 comment:
Email ThisBlogThis!Share to TwitterShare to FacebookShare to Pinterest
Newer Posts Older Posts Home
Subscribe to: Posts (Atom)